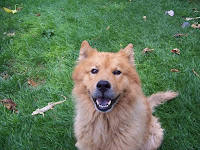 When it comes to helping sick pets, colloidal silver is one of the most wonderful natural remedies in the world. I’ve used it on my pets (three rescue dogs) for nearly 17 years now, and it’s proven itself over and over again to be a Godsend. Here’s my latest “pets and colloidal silver” success story…

My 14 year old Chow, named Red Dog, fell sick about 15 days ago with some kind of terrible stomach infection.

He was heaving and vomiting the first day, and then went completely lethargic the second day.  He couldn't eat or drink or even stand up.  He just laid there.

And honestly, I figured he wasn’t going to make it, since he was so old and the infection had just wiped him out.  No strength left whatsoever.

Since he wouldn’t eat or drink, there was no point in adding colloidal silver to his water bowl, or to his food.

At first, he wouldn't even swallow.  In fact, he'd clench his teeth shut in resistance.

I did this for three days straight.  On the second day he got up and moved around a bit.  But he still wouldn't eat.

On the third day, however, he got up and moved around quite a bit more (albeit with difficulty).  And later that night he was doing so much better, he started drinking water again, and he actually ate a full meal with our other dogs.

By the fourth day of treatment, he was doing much, much better – back up running around and following me wherever I’d go.

Got It On Video!

Coincidentally, we had a film crew out to the house to help me do some little video shorts on various aspects of making and using colloidal silver.

The videos should be ready in mid-September.

Plus, I’ll send the links by email to all readers of the Colloidal Silver Secrets ezine.

In the meantime, you can learn more in my older article, Colloidal Silver and Pets.

By the way, Red Dog is doing just great.  When I go outside, he follows me around everywhere.

Looking at him now, you’d never know he was so sick.  The difference between how he looked ten days ago, and today, is astonishing.  Had you seen him at that time, you’d have sworn he was on death’s door prior to the colloidal silver treatment.

If you’d like to learn more about making and using colloidal silver, just click the link.  Meanwhile, I’ll be back next week with another great article…

Posted by Steve Barwick at 9:55 PM