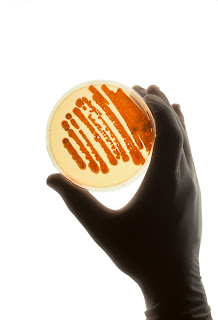 The Centers for Disease Control (CDC) is now warning that Carbapenem-Resistant Enterobacteriaceae (CRE) – which include drug-resistant forms of Klebsiella pneumonia and E. coli – are becoming “increasingly resistant” to antibiotic drugs.

Thankfully, preliminary research has demonstrated that colloidal silver and other forms of antimicrobial silver are astonishingly effective against these pathogens.  Here’s what you need to know…

The Centers for Disease Control (CDC) is now calling for the entire U.S. health care community to work urgently – individually, regionally and nationally – to protect patients against infection by the new Carbapenem-Resistant Enterobacteriaceae (CRE) pathogens.

These lethal, drug-resistant pathogens are now spreading throughout hospital environments nationwide (and worldwide), killing up to 50% of all patients who end up with blood-borne infections.

According to the most recent CDC bulletin:

“Data show more inpatients suffering infections from bacteria resistant to all or nearly all antibiotics.

The bacteria…kill up to half of patients who get bloodstream infections from them.

In addition to spreading among patients, often on the hands of health care personnel, CRE bacteria can transfer their resistance to other bacteria within their family.”

The New York Times also chimed in on the issue, warning in this news article:

“The bacteria, normally found in the gut, have acquired a lethal trait: they are unscathed by antibiotics, including carbapenems, a group of drugs that are generally considered a last resort.

When these resistant germs invade parts of the body where they do not belong, like the bloodstream, lungs or urinary tract, the illness may be untreatable.

The death rate from bloodstream infections can reach 50 percent.”

Stay Out of Hospitals

Of course, the smartest thing to do in order to avoid becoming infected by this deadly group of pathogens is to stay the heck out of hospitals, where they are chiefly spread on the hands and gowns of hospital workers.

But if a hospital stay is unavoidable, colloidal silver may well be your one big hope of survival.

Indeed, if a hospital stay is in your near future, you might want to review my previous article titled “Colloidal Silver and Hospital-Acquired Infections: What You Can Do to Protect Yourself!”

I warned of the spread of CRE pathogens way back in May, 2011, well before most health authorities were aware of this class of pathogens.

Back then, doctors thought there was only one form, which they had dubbed “CRKP,” which stands for Carbapenem-Resistant Klebsiella pneumonia.  (Carbapenem, of course, is the so-called “antibiotic drug of last resort.)

Today, doctors are aware that other bacteria of the Enterobacteriaceae family have joined the ranks Carbapenem-resistant pathogens, including some forms of E. coli, as mentioned earlier.

So they have now changed the name from “CRKP” to the more inclusive “CRE,” which stands for Carbapenem-Resistant Enterobacteriaceae.

As I explained in my previous article, “Colloidal Silver and the Deadly Super-pathogen CRPK,” preliminary lab research indicates colloidal silver is astonishingly effective against the Klebsiella pneumonia pathogen.

In fact, up to 75% of antibiotic-resistant strains of the Klebsiella pathogen were stopped cold by silver-based antimicrobials.

And even when silver didn’t kill the pathogen, it completely disabled it, preventing it from becoming infectious.

According to the Physicians Guide to Natural Health Products that Work, by James Howenstine, M.D., colloidal silver has indeed been demonstrated to be effective against the Klebsiella pathogen:

In the hospital, the therapy is administered by a special nebulizer as well as orally."

And according to a nurse who posted to the internet about her experience after contracting CRKP:

“For me colloidal silver was a life saver when I contracted a serious form of pneumonia from the CRKP bacteria, or Carbepenem-resistant Klebsiella pneumonia, after taking care of two patients who were suspected of having it.”

The nurse went on to explain that she used a medical nebulizer to inhale the colloidal silver into her lungs, and thus get it into the bloodstream. (To learn how to use colloidal silver with a nebulizer, see the article at the link.)

And according to a May, 1999 report from the Microbiology Department of Brigham Young University in Provo, Utah, when colloidal silver was tested against Klebsellia pneumonia, it took only 2.5 ppm to “inhibit and kill” the pathogen!

Here’s an excerpt from the report, written by David A. Revilli, microbiologist, and Dr. Ron W. Leavitt, Ph.D., Professor of Microbiology/Molecular Biology, both of BYU:

So the good news is that colloidal silver appears to be extremely effective against at least one of the two Enterobacteriaceae family pathogens that are now causing such consternation among Centers for Disease Control medical bureaucrats.

And while this does not prove colloidal silver will be effective against the latest Carbapenem-resistant strains, it is certainly a strong enough indication for medical authorities to follow through on.

More importantly, it’s a strong enough indication for you to keep in the back of your mind, should you or a family member ever become infected with this particularly deadly class of pathogens.

What’s more, the same types of past clinical results pretty much holds true for the second Enterobacteriaceae pathogen now causing fits among doctors and health authorities, i.e., the drug-resistant forms of E. coli.

In fact, back in June 2011 when a deadly, drug-resistant strain of the E. coli microbe was sweeping across Europe, I wrote an article titled “Colloidal Silver and E. Coli,” in which I revealed that silver-based antimicrobials had indeed been demonstrated to be effective against drug-resistant forms of the pathogen.

In that article, I revealed the seven clinical studies that have demonstrated the effectiveness of silver-based products – including silver ions, silver nanoparticles and colloidal silver -- against E. coli.

That included this study titled “Colloidal Silver as a New Antimicrobial Agent,” which was published in the International Journal of Microbiological Research back in 2010.

And in this study, titled “Bactericidal Effect of Silver Nanoparticles Against Multi-Drug Resistant Bacteria,” which was published in 2010 in the World Journal of Microbiology and Biotechnology, researchers found that the silver nanoparticles easily inactivated drug-resistant bacteria, including E. coli.

The researchers found that the tiny silver particles actually began inhibiting the bacterial growth rate from the very first moment of contact between the bacteria and the silver nanoparticles.

Finally, in another study, titled “Antimicrobial Activity of Colloidal Silver Nanoparticles Prepared by Sol-Gel Method,” published in 2011 in the Digest Journal of Nanomaterials and Biostructures, it was reported that “all tested microorganisms were completely inhibited at the concentration of 2–4 μg/ml of nano silver.”

This study included both the E. coli pathogen and the Klebsiella pneumoniae pathogen, which were killed in the laboratory at 3 ppm and 4 ppm colloidal silver, respectively!

So there you have it.

The preliminary evidence, based upon numerous past clinical studies, is that colloidal silver has been demonstrated to be astonishingly effective against drug-resistant strains of both Klebsiella pneumoniae and E. coli.

These are the two Enterobacteriaceae family pathogens that are now giving doctors fits worldwide, and causing the deaths of up to 50% of all who end up with blood borne infections.

Therefore, colloidal silver may well turn out to be one of the last lines of defense against the new “CRE” strains of these two pathogens the health authorities are now fighting against.

Of course, it remains to be seen if medical science picks up on this vital information on silver’s efficacy against drug-resistant strains of these two pathogens, and follows through on it.

Oftentimes, brewing crises like this one seem to be motivated more by pocketbook issues.  In other words, scare stories like this one are often used to justify why the big drug companies should be paid hundreds of millions of dollars in taxpayer monies to develop new antibiotic drugs.

(See my article “Big Pharma Shuns Silver; Blackmails U.S. Government Into Paying for New Antibiotic Drugs With Taxpayer Money” if you’d like to know more about the scam of using taxpayer money to pay for new antibiotic drug development.)

Nevertheless, it’s important for you to have this crucial information on silver’s efficacy against drug-resistant pathogens.

After all, you never know when it may come in handy, if only to pass along to your own physician should you or a loved one end up with a similar hospital-acquired infection!

I’ll be back next week with another great article on colloidal silver.

Meanwhile, if you’re interested in learning how to make your own high-quality colloidal silver – in the comfort and privacy of your own home, for less than 36 cents a quart – just click the link in this sentence.

Posted by Steve Barwick at 7:24 PM