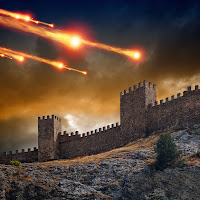 A number of new studies demonstrate conclusively that antimicrobial silver busts through bacterial biofilms, and can even prevent microbes from forming biofilms.

This is important news, because biofilms are the protective “fort”-like structures erected by colonies of pathogens in order to evade the effects of antibiotic drugs.

Bacterial biofilms are essentially “slime cities” of pathogens protected by an “extracellular matrix” constructed of (and held together by) proteins and polysaccharides commonly referred to as extracellular polymeric substances (i.e., EPS).

After adhering to a surface, the bacteria begin secreting the proteins and polysaccharides which are in turn used to build the protective matrix around the bacterial colony as it grows.  This in turn acts as a “fort,” so to speak, making the colonies of pathogens far more difficult to kill even with the strongest of antibiotics.

These bacterial biofilms are one of the main ways bacteria are able to defeat the effects of antibiotic drugs, other than through mutation.

Thankfully, researchers are discovering that colloidal silver – in the form of silver ions – can effectively impair bacterial biofilms by destabilizing the protective extracellular matrix constructed around them.

In other words, the silver ions essentially poke holes in the walls of the bacterial “fort,” causing the walls to begin to crumble, and exposing the pathogens hiding inside.

In this study, published in the journal Antimicrobial Agents and Chemotherapy (Dec. 2005, American Society for Microbiology) it was revealed that the extracellular matrix around Staphylococci epidermis biofilms have been found to be "markedly impaired" by very low levels of silver ions.

According to the study authors, silver ions destabilize the extracellular polymeric substances (i.e., EPS) of which the biofilm matrix is constructed and held together.

"Our AFM studies on the intermolecular forces within the extracellular polymeric substances of S. epidermidis RP62A and S. epidermidis 1457 biofilms suggest that the silver ions can destabilize the biofilm matrix by binding to electron donor groups of the biological molecules.

...This leads to reductions in the number of binding sites for hydrogen bonds and electrostatic and hydrophobic interactions and, hence, the destabilization of the biofilm structure...

...After the addition of silver ions and within 60 min of contact, the overall structure of the biofilm became partially destroyed and the inner structure of biofilm was exposed.

There were also significant amounts of EPSs around the damaged biofilm colony, confirming the effect of silver ions on the grown biofilm matrix."

Now that’s quite a mouthful, isn’t it?

But in plain English the study authors are saying, essentially, that the silver ions destabilize the biofilms through an electro-chemical process that ultimately robs the biofilms of their structural integrity.

The extracellular matrix, or “fort” that’s been constructed around the bacterial biofilm colonies begin to fall apart, thereby exposing the pathogens.

Importantly, the silver ions can accomplish this within 60 minutes of exposure to the biofilms, and at very low levels.

The study authors focused on two different strains of Staphylococci epidermis --  a Staph bacteria of the skin that’s very similar to Staphylococcus aureus of MRSA fame.

Other pathogens such as Psuedomonas aureginosa are also known to protect their colonies from the effects of antibiotic drugs with biofilms.

In another study, this one published in the journal Colloids and Surfaces B: Biointerfaces, (Vol. 79, Issue 2, Sept. 2010), titled “Silver Nanoparticles Impede Biofilm Formation by Pseudomonas aeruginosa and Staphylococcus epidermidis”…

…it was demonstrated that a staggering 95% inhibition of biofilm formation could be achieved within 24 hours simply by treating the Pseudomonas microorganism with silver nanoparticles.

This may be one reason why colloidal silver is so effective against Pseudomonas infections, as well.

Plaque on teeth is also a protective biofilm produced by dental pathogens.  Interestingly enough, in the past, silver has also been shown -- both in animal studies and in research for a dental patent -- to help rid teeth of plaque.

Even E. coli bacteria have been known to produce biofilms.  And of course, E. coli is another pathogen known to be susceptible to the infection-fighting qualities of antimicrobial silver.

Even Works Against Fungal Biofilms

In another study, published in the journal Biofouling, titled “Silver Colloidal Nanoparticles:  Antifungal Effect Against Adhered Cells and Biofilms of Candida albicans and Candida glabrata,” it was found that silver nanoparticles exhibited fungicidal activity against two species of fungi “at very low concentrations.”

More importantly, it was discovered that the silver nanoparticles were effective in inhibiting biofilm formation by these fungi – in other words, the silver prevented the fungi from building biofilms.

However, the researchers found that in the case of these two fungi, the silver nanoparticles were not quite as effective in breaking down existing fungal biofilm formations.

In a more recent study published in June 2013 the journal Science Translational Medicine, titled “Silver Enhances Antibiotic Activity Against Gram-Negative Bacteria,” it was revealed by the study authors that silver treated bacteria weren’t even able to produce a biofilm at all, and that when drug-resistant biofilms were treated with silver, the bacterial resistance to antibiotic drugs was completely negated.

“Overall, what we show is that small amounts of silver, non-toxic levels, can be used in conjunction with commonly used antibiotics to treat persistent infection and to treat bio-film based infections, which are problematic for medical implants,” study author Jim Collins said.

Also quite interesting is a 2001 press release from a company called NVID International, Inc., developers of a disinfectant product called Axenohl, which is “an ionic silver-based antimicrobial technology.”

Axenohl, composed of stabilized ionic silver, was tested in the municipal drinking water system in Grecia, Costa Rica, which had become non-potable (i.e., non-drinkable) due to coliform bacteria contamination.

As a result of the use of only 78 parts per billion Axenohl in the city’s water supply – a remarkably small amount of silver -- the bacterial count decreased from over 200 CFU (i.e., coliform forming units) per 100 ml water to zero CFU per 100 ml water, in only 10 days.

Moreover, “Axenohl proved to control and reduce the presence and growth of biofilm in the piping distribution network.”

So thanks in large part to recent research, it’s becoming abundantly clear that in many cases, silver is able to either inhibit the formation of bacterial biofilms, or even bust through and destroy existing biofilms, depending upon the type of pathogen involved.

This is great news, because it demonstrates another important quality possessed by antimicrobial silver which is not possessed by Big Pharma’s failing prescription antibiotic drugs.

And it offers new hope that antimicrobial silver will ultimately be recognized as the solution to the growing problem of drug-resistant pathogens.

If you’d like to learn more about the immune-boosting and infection-fighting qualities of colloidal silver, feel free to check out some of my other short articles by clicking the link in this sentence.

And to learn how to make your own high-quality colloidal silver, in the comfort and privacy of your own home, for less than 36 cents a quart, just click the link in this sentence.

Meanwhile, I’ll be back next week with another great article on making and using colloidal silver…

Posted by Steve Barwick at 4:22 PM