More and more test tube clinical research is being conducted, demonstrating that silver in a variety of forms is able to cause cancer cells to destroy themselves.

In the following article, you’ll see that researchers have found both ionic silver and metallic silver to cause cervical cancer cells to commit cellular suicide through a process called apoptosis.

This, in my opinion, could ultimately have profound implications for women diagnosed with abnormal cell growth in the cervix caused by Human Papillomavirus.

As usual, the authors use the study to claim silver is harmful to human cells in general, which of course is a crock, as silver has been repeatedly demonstrated to protect normal, healthy human cells.

(To learn about colloidal silver’s demonstrated and quite dramatic cell-protective effects see the previous articles here and here.)

In this study, a HeLa cell line was used, which is a cell line composed of human cervical cancer cells – the same kind of cancer known to be caused in women by Human Papillomavirus.

According to the study abstract, the researchers found that silver nanoparticles caused the cervical cancer cells to self-destruct, in a process called apoptosis.

“Nanosilver has well­-known antibacterial properties, and is widely used in daily life as various medical and general products.

In comparison with silver ion, there is serious lacking of information concerning the biological effects of nanoAg [i.e., metallic silver -- ED].

In this study, we observed the cytotoxic effect of nanoAg in HeLa cells.

The nanoAg­-induced cytotoxicity was lower than that of AgNO(3), used as a silver ion source.

Apoptosis…was associated with this cell death.”

In other words, in this test tube study, when a source of silver ions was used on the HeLa cells line (i.e., cervical cancer cell line) the cancer cells committed cellular suicide (apoptosis) at a higher rate than when the same cancer cells were exposed to metallic silver.

Nevertheless, both types of silver – ionic and metallic – worked against the cancerous cells.

(For a more in-depth understanding of the differences between ionic and metallic colloidal silver products, see the True Colloidal Silver Facts website.)

This could ultimately have important ramifications for women diagnosed with abnormal cell growth in the cervix caused by Human Papillomavirus.

Keep in mind this was strictly a test tube study, and not an animal or human study.  So it does not “prove” that silver in any form would “cure” cancer.

But it’s certainly one more piece of evidence in a growing body of recent clinical and anecdotal evidence indicating that silver destroys a wide variety of cancer cells.  For example, see:

·       Is Nanosilver the Cure for Neuroblastoma Cancer?

Also, see Another Bogus Study Claims Nanosilver Harms Human Cells for a more in-depth expose’ of the ongoing drive to mis-portray silver as being harmful to human cells, when instead the studies are clearly demonstrating silver’s profound anti-cancer properties.

Obviously, if you’re interested in reading more about this topic, you’ve now got your reading cut out for you.

The above links constitute an exciting overview on the growing body of evidence from clinical research indicating that antimicrobial silver is also anti-cancerous.

Make Your Own Colloidal Silver for Pennies! 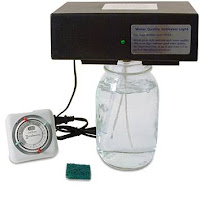 If you’re already familiar with colloidal silver and its usage, you know that liquid colloidal silver supplements can be very expensive – as much as $20 to $30 for a tiny four-ounce bottle at most health food stores.

That’s because it works so well against infections and disease, people are willing to pay through the nose for it.

But the good news is this:

It’s surprisingly easy to make your own high-quality colloidal silver for less than 36 cents a quart – yes, that’s just a smidgeon over a penny per ounce -- utilizing an astonishing breakthrough in colloidal silver-making technology known as the Micro-Particle Colloidal Silver Generator from The Silver Edge.

The new Micro-Particle Colloidal Silver Generator from The Silver Edge is far more advanced than conventional colloidal silver generators (learn why, here), being able to produce tiny silver micro-particles as small as .8 nm – a fraction of a single nanometer in size!

Even the FDA agrees that the smaller the silver particles are, the easier it is for the body to absorb them, utilize them and afterwards excrete them safely.

(See here for excerpts from the FDA National Center for Toxicological Research Annual Report in which it was clearly demonstrated that smaller silver particles are far more bioavailable than larger silver particles.)

If you’re a do-it-yourselfer, like me, you can learn here how astonishingly inexpensive it is to make your own high-quality colloidal silver (i.e., about a penny per ounce) with a Micro-Particle Colloidal Silver Generator from The Silver Edge.

Why Pay Through the Nose?

This means there’s no longer any need to pay $20 or $30 for a tiny, four-ounce bottle of colloidal silver in health food stores, when you can make it yourself by the quart for under 36 cents.

Indeed, with a device that’s as simple to operate as a coffee pot (see above photo of the new Micro-Particle Colloidal Silver Generator from The Silver Edge, or click here), just about anyone can make their own high-quality colloidal silver for just a few pennies per quart!

·      Learn more about the Micro-Particle Colloidal Silver Generator from The Silver Edge, here.

·      Discover how astonishingly easy it is to make your own colloidal silver, here.

·      See why the new Micro-Particle Colloidal Silver Generator from The Silver Edge is the world’s #1 best-selling colloidal silver generator, here.

·      Save $100 on a brand new Micro-Particle Colloidal Silver Generator, here.

Posted by Steve Barwick at 6:24 PM