What’s more, a plethora of clinical studies have demonstrated conclusively that the smaller the silver particles are, the more effective they are against pathogens, too.

Nevertheless, according to the FDA’s National Center for Toxicological Research Annual Report for 2011, silver nanoparticle size makes a big difference in terms of how effectively the body can absorb, distribute and utilize orally ingested silver particles.

However, as the silver particle size decreased, absorption by the body increased proportionately. According to the report:

“…During Fiscal Year 2011, Division investigators examined the effect of the size of silver nanoparticles on the bioavailability, tissue distribution, metabolism, and clearance in rats.

The results indicated that, after oral administration, only limited absorption occurs, with the extent of absorption increasing as the size of the [silver] particles decreased.”

In other words, when the FDA conducted animal studies looking to see whether silver particle size had any effect on the way the body absorbed, processed, utilized and afterwards excreted the silver, they discovered that smaller silver nanoparticles were far more bioavailable (i.e., able to circulate systemically and be eliminated afterwards) than larger silver nanoparticles.

Unless the silver particles are in the lower end of the nanoparticle size range, the body simply can’t put them to use.  There’s very little “bioavailability, tissue distribution, metabolism, and clearance” when larger silver nanoparticles are orally ingested.

Smaller is More Effective, Too!

Andrew Maynard, a physicist and chief scientific advisor to the Project on Emerging Nanotechnologies at Woodrow Wilson International Center for Scholars in Washington, concurs with this analysis, stating:

“Silver becomes more active against microbes when it's made into smaller particles.”  This, clinical researchers explain, is because the more finely divided the silver particles are, the more surface area of the bacteria (or bacterial colony) they can cover and penetrate.  (See Wall Street Journal, June 6, 2006, The War Against Germs Has a Silver Lining.)

Researcher S.M. Foran, writing in Therapeutic Properties of Silver:  A Historical and Technical Review in the journal Quanta, also pointed out that smaller silver particles penetrate microbes “more rapidly and effectively” than larger particles or clusters of particles.  He states:

“The most current research indicates that a silver product must have a low silver concentration and contain small silver particles that are charged (ions) for it to produce the most beneficial effects."

“In general…it takes a smaller particle size to kill a virus v/s a bacteria.”

Chinese researchers looking at the antimicrobial effects of tiny silver nanoparticles on Hepatitis B virus found that the smaller silver nanoparticles worked better because they more easily bind with small molecules such as the receptor sites on the outside of viruses.

For example, in a 2006 study published in the Journal of Physical Chemistry B, titled “Silver Colloidal Nanoparticles:  Synthesis, Characterization and Their Antimicrobial Activity,” researchers pointed out that the deadly super-pathogen MRSA could easily be destroyed with silver, “as long as the silver particles were very small, averaging 25 nm.”

Indeed, the increased effectiveness of smaller silver particles against pathogens is now considered axiomatic, which is to say, self-evident, because it’s been conclusively demonstrated in so many different clinical studies.

For example, one recent clinical study at Hebrew University in Israel demonstrated that when bacteria are treated with extremely small silver particles, the bacteria absorb them like a sponge.

Then, as the bacteria die, they re-release the tiny silver particles into the bacterial colony, killing even more of the bacteria until the entire colony is dead.  The researchers actually called this “the zombie effect.”

The smaller your silver particles are, the more of a “one-two punch” you can deliver – the particles can reach the pathogens easier by being more bioavailable, and once they reach them, they kill them faster and more effectively. 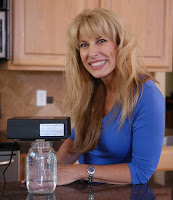 It was for these reasons, and more, that The Silver Edge stopped selling all conventional colloidal silver generators years ago, and focused solely on providing the public with the new Micro-Particle Colloidal Silver Generator.

You see, the Micro-Particle Colloidal Silver Generator produces the smallest silver particles of any colloidal silver generator on the market today, i.e., as low as .8 nm -- a fraction of a single nanometer!

These are uncommonly small silver particles, even when compared to those found in some of the most popular bottled brands of colloidal silver. (See Transmission Electron Microscope slides here, comparing conventional silver particles with our tiny silver micro-particles.)

And that’s why the Micro-Particle Colloidal Silver Generator quickly became the world’s #1 best-selling colloidal silver generator, and remains so to this very day.

As Close to "Dissolved"
Silver Particles As You Can Get!

Perhaps now you can see why there are more of these ingenious little devices being sold every month than any other colloidal silver generator on the market today!

The Micro-Particle Colloidal Silver Generator runs on standard 110 volt household power (you simply plug it into any convenient grounded household wall outlet, just like you'd plug in a toaster), which is then automatically "stepped down" with a built-in transformer to a safe, low-voltage DC current.

You No Longer Need to Take
High Concentrations of Colloidal Silver!

Each three hour batch of micro-particle colloidal silver produces a concentration of approximately 7-10 parts per million (ppm), using a one quart container.

And while much higher concentrations can be obtained simply by letting the generator run longer, one of the most profound benefits of the Micro-Particle Colloidal Silver Generator is that because of the phenomenal absorption and utilization qualities of micro-particle colloidal silver, you no longer have to take high concentrations of colloidal silver to achieve the desired results! 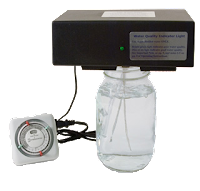 As I mentioned previously, the Micro-Particle Colloidal Silver Generator has been the world's #1 best-selling colloidal silver generator for the last 10 years running.

Tens of thousands of people worldwide – in the U.S., Canada, Mexico, South America, the UK, Australia, New Zealand, Asia, Africa, the Middle East and more -- now own this phenomenal advance in colloidal silver-making technology, and are able to make their own colloidal silver for about 36 cents a quart.

Here are just a few reasons why you should own one, too...

·       It pays for itself after your very first batch - your total cost to make your first quart is about 36 cents, compared to the $240 you'd pay at a health food store if you bought an equivalent amount (i.e., eight of those little 4-ounce bottles they normally sell for $30 apiece)!

·       Safe, simple to operate...No special skills needed…You just set the handy timer, plug it in, walk away, and three hours later you have a perfect batch of therapeutic quality micro-particle colloidal silver…every time!

·       Runs on standard household electricity, but uses less power than a tiny Christmas tree bulb - you won't even see a blip on your electric bill!

·       Produces uniform, crystal clear batches every single time that store for months, or even years, without losing potency!

If you’d like to learn more about this astonishing breakthrough in colloidal silver-making technology that’s never been matched…
Meanwhile, I’ll be back next week with another great article on colloidal silver….