Is “Mother Earth” Making Her Own Colloidal Silver? 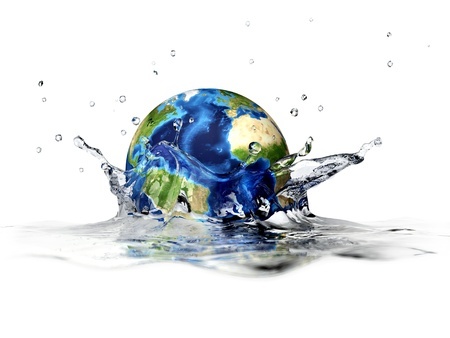 The ultimate irony is taking place: Radical environmentalists are attempting to force the EPA to regulate silver nanoparticles in order to “protect the environment.”

Meanwhile, it turns out “Mother Earth” has been manufacturing her own silver nanoparticles en masse – and likely for eons! The irony, of course, is completely lost on the radical environmentalists…

Of course, what the environmentalists ignore is this:

And secondly, the earth has a way of bonding the silver ions to minerals such as sulfur, making them essentially as harmless as…well...dirt. (See my previous article, "In Defense of Colloidal Silver Nanoparticles")

This is exactly why the world’s oceans can contain millions of TONS of trace silver, yet those oceans are teeming with abundant life, both plant and animal.

And it is why the lakes and streams in major silver mining areas can also contain TONS of trace silver, yet are also teeming with abundant plant and animal life.

The huge amounts of trace silver that exist in nature simply can’t harm the little critters in the environment, because nature has its own way of sequestering the silver and making its antimicrobial properties inert.

Turns Out, Mother Earth Is Also Making Her Own Silver Nanoparticles!

But scientists have just now discovered that earth has another fascinating way of dealing with silver ions in the environment.

Indeed, it has been discovered that nature uses a chemical called humic acid to convert the supposedly “toxic” silver ions BACK to less toxic silver nanoparticles.

Indeed, according to the authors of a new study, the earth appears to be manufacturing silver nanoparticles on its own!

Apparently, humans are Johnny-come-latelies to the process, as earth has likely been manufacturing its own silver nanoparticles out of natural silver ions for…yes, eons!

You see, humic acid is ubiquitous in the environment. It’s produced by humic substances – chiefly dead, decaying vegetation -- which are the major organic constituents of almost all soil, streams, lakes and even ocean water.

And according to the study authors, when humic acid and silver ions come into contact in nature – particularly during warm weather -- silver nanoparticles are produced.

Not only that, but nature coats the newly-produced silver nanoparticles with constituents of the humic acid, so they are more stable and less prone to give off additional silver ions.

It wouldn’t surprise me in the least to find out she’s making them to spite the very environmentalists who claim to be trying to protect her by regulating the commercial production of silver nanoparticles!

It just goes to show that the radical environmentalists do not have a CLUE as to how things work in the very nature they claim to be the protectors of.

The radical environmentalists simply want to have the EPA hyper-regulate every aspect of business and industry, including the production of useful products that contain antimicrobial silver nanoparticles.

So they blame findings of silver nanoparticles in the environment on business and industry, and scream to the high heavens for the government bureaucrats to hyper-regulate every product containing antimicrobial silver.

And you know what happens when government starts hyper-regulating things, don't you? The costs go up to the point it is no longer economically feasible to produce the products.

And that, my friends, is exactly what the radical environmentalists are after.

Meanwhile, Mother Nature continues manufacturing silver nanoparticles on her own, with a sense of humor I’m sure is completely lost on the radical environmentalists.

Indeed, “Mother Earth” herself may be the most prolific manufacturer of silver nanoparticles…on earth!

How’s that for irony? The people claiming to “protect” the earth from silver nanoparticles are actually trying to regulate a product that “Mother Earth” herself apparently manufacturers!