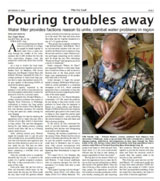 According to this study Microdyn is totally ineffective:

That's a very strange study overview, as it speaks of "removing" the microbes from the food, rather than killing the microbes.

If you read the end of the last paragraph, it almost sounds as if they were trying to wash the lettuce with the products tested.

Microdyn has been around for decades. And it has literally millions of satisfied users, in Mexico particularly where it's used to sanitize the drinking water.

I've seen other "studies" where it was claimed that colloidal silver "didn't work" against the chosen pathogens. But then, how do you explain all of the dozens and dozens of studies where there is no question that it worked?

You can read through over five dozen clinical studies and white papers on the infection-fighting qualities of colloidal silver at this link: http://thesilveredge.com/studies.shtml