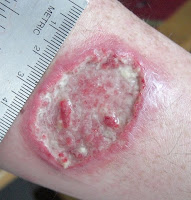 The parasitic skin infection known as Leishmaniasis afflicts some 12 million people worldwide, in 98 countries, with up to two million new cases reported each year.

It’s an extremely painful skin condition which can lead to death if left untreated.  Indeed, there are some 20,000 to 50,000 deaths from Leishmaniasis each year, worldwide. What’s more, medications used to treat the dread disease are often toxic in nature.

Leishmaniasis is endemic in many Middle Eastern countries from which refugees come to the west.  And western troops involved in Middle East conflicts often pick up this horrific, skin-eating disease, which is what spurred the U.S. Army to study silver as a potential solution.

Here’s what they learned…

Breitbart, a well-known right-wing political site, recently posted this article about the potential for Syrian refugees bringing a horrific and potentially deadly skin disease called Leichmaniasis into the western nations.

When I posted a link to the article to the Colloidal Silver Secrets Community web page on Facebook, with the intention of discussing colloidal silver as a first-line defense against this parasitic skin disease for anyone afflicted with it…

…I was stung with a barrage of angry posts from readers accusing me of everything from “xenophobic fear-mongering” to “promoting vaccines.”

Some people – in a huff of self-righteousness -- even clicked “unlike” and quit following the community.  One stated, “I’m unliking your page for sharing political propaganda.”

Of course, the article I posted the link to doesn’t even mention the dreaded “v” word (i.e., vaccines).  Indeed, there’s no such thing, to the best of my knowledge, as a vaccine for parasitic skin diseases like Leichmaniasis.  So that’s altogether a non-issue.

And whether or not the intention of the Breitbart article was to promote xenophobia (i.e., fear of foreigners) is up in the air as well, since the article isn’t a shrill call for a halt to immigration, but instead, a very reasonable call for better screening of refugee immigrants who might carry this infectious disease.

As for the charge that I’m “promoting political propaganda,” it’s a well-known fact that 12 million people around the world suffer from Leishmaniasis, and that the disease is indeed endemic in some 98 countries, including the Middle Eastern nations listed in the article.  It’s not “propaganda.”  It’s just simple factual data.

My point in posting the link was, and remains, that colloidal silver is a very effective solution to the horrific and potentially deadly problem of Leishmaniasis parasitic skin infections.

And based on recent clinical studies – on of them by the U.S. Army -- silver may very well turn out to be the single-best all-natural front-line treatment for the disease, particularly for those whose health makes it impossible for them to handle the toxic prescription drugs so often prescribed for this disease.

I suppose there’s nothing I can do about those can’t see that my intentions in publishing the information were honorable – as always, with the health and well-being of the afflicted as the uppermost thought in mind.

When one’s political beliefs are so highly-charged that they can’t see the actual point I’m trying to make, but instead, have an instantaneous knee-jerk reaction of striking out to afflict as much damage as possible, well, what can I say but don’t let the door hit you in the ass on the way out.

Studies Demonstrating
Silver to Be Effective

As the Silver Health Institute has previously pointed out, the U.S. Army has already found that Leishmaniasis responds exceptionally well to silver treatment.  They wrote:

“Leichmaniasis is a parasitic infection.  It shows up just under the skin as a purple rash and raises welts and boil-like symptoms all over the body.

Soldiers in Afghanistan have been suffering from this infection and it has been very difficult to remedy.

They found that drinking two teaspoons two to three times a day could destroy the parasite.

The gel should also be applied two to four times as needed.  You can expect to see a benefit over the course of eight weeks.”

So this is breakthrough news.  And to my mind, it brings great hope to the 12 million people worldwide said to be already afflicted with Leishmaniasis.

But it’s not new news by any means.

Here’s what I wrote on the topic several years ago on The Silver Edge website, when I posted another study demonstrating silver to be effective against this infectious parasitic condition:

"According to this clinical study, published in the International Journal of Nanomedicine in November 2011, researchers found for the first time that silver nanoparticles are effective against the Leishmaniasis pathogen.

This is a protozoan parasite that causes Leishmaniasis, a disease that is potentially fatal if left untreated, and which causes ulcers of the skin, mouth and nose, plus fever, anemia and enlarged spleen and liver.

The researchers demonstrated that silver nanoparticles significantly inhibited the infectivity of the Leishmaniasis pathogen, "inhibiting all biological activities of the parasite."

‘Therefore, the authors consider a new approach, one that includes the application of silver nanoparticles on vectors that carry infective Leishmania promastigotes, may be offered in the near future, and that this may prevent the disease from spreading...

‘The results clearly show there is no need to apply high concentrations of silver nanoparticles for inhibiting amastigotes, and this may be very promising for the treatment of leishmaniasis…

‘Since leishmaniasis is spreading rapidly worldwide and because anti-leishmanial drugs have several disadvantages, the authors posit that treatment based on silver nanoparticles may have a very important role in overcoming leishmaniasis.’”

You can read the actual clinical study demonstrating that silver cures leishmaniasis, and that its anti-leishmaniasis activity can be enhanced with ultraviolet light, at this link.

Overall, I think you’ll agree that this is exceedingly good news – not just for the 12 million people spread across 98 countries that suffer from this dread parasitic skin infection, but also for those in the west who might inadvertently be exposed to it through contact with infected refugee immigrants.

If silver were used as a front-line treatment for Leishmaniasis, it’s likely nobody would have to die from this otherwise horrific flesh-eating disease.

And it’s doubtful there would be any significant spread of the disease through immigration into the population of any host country, as well, if silver would be adopted as the front-line defense.

And yes, I know some readers will read online that Leishmaniasis is only transmitted through the bite of sand flies, and not through person-to-person contact.  But in that regard, the RightDiagnosis.com website says the following:

…“The contagious disease, Leishmaniasis, can be transmitted:

Now, go ahead cue the howls of protests from both sides of the political spectrum, if you’d like.  But my job in these articles, and in my posts on the Colloidal Silver Secrets Community on Facebook, is not a political one.

Instead, my self-imposed job, as a natural health journalist, is to promote solutions to pressing health issues.  And that’s exactly what I’m doing.

Here are a few more pieces of interesting information that might be helpful in light of the situation:
The real issue, for me, anyway, is whether or not colloidal silver can help people suffering from Leishmaniasis.

I don’t care whether they’re living in any of the 98 countries across the world in which this disease is common, or whether or not they’re refugees to western nations who might otherwise spread the infection.

A little over an ounce of colloidal silver a day for about eight weeks, plus some good colloidal silver gel slathered on topically each day for the same amount of time, appears to be a simple, effective and relatively inexpensive solution to a potentially deadly problem.

And all sides of the political spectrum would benefit from this solution.  So please:  No more howls of protest.

Try to see past your own political biases to the fact that a very painful, infectious and potentially deadly disease has an effective all-natural solution.  And that solution is SILVER.

Thankfully, there’s no need to pay such exorbitant prices for colloidal silver, when you can make your own, quickly and easily, in the comfort and privacy of your own home, for about 36 cents a quart.

Yes, you can make it yourself for its actual cost, and altogether skip the high mark-ups at health food stores!

If you’re interested in learning how to make your own high-quality colloidal silver at home, for about 36 cents a quart, here are some additional short articles you might want to take a look at: